HelenaByrne · Episode 3 – “Have You Picked Up Your Gas Mask Yet?”

While Ireland was of course neutral during World War II, childhood memories for those growing up in the Dún Laoghaire-Rathdown area were undoubtedly still impacted by this huge historical event. Some of the darkest aspects of what the Irish government called ‘The Emergency’ were seen through the rose-tinted glasses of youthful innocence. Collecting your gas mask from Dalkey Town Hall and playing with it on the walk home was an exciting novelty, and the Air Raid Shelters scattered around the County made for the best makeshift playgrounds. Certain foods such as flour were rationed, leading to what was by all accounts, a very unpleasant ‘Black Bread’. Childhood naivety aside, the sense of danger generated by bombings in Dublin, still created palpable anxiety in the local community here.

“There was a lot of fear at the time, and there were those bomb
shelters, and you’d be run with your parents to the nearest bomb shelter. Only once I remember doing that as a child.” – Leopardstown Park Day Centre Member

“There was an Air Raid Shelter down in Devitt Villas. And I remember going up, we went up to Dalkey Town Hall for our (gas) mask, you know? And we had to go up and get the mask and we’d have it on our shoulders. And like, it was just an ordinary thing, you know?” – Beaufort Day Care Centre Member

“I don’t remember the war that much because I was born in 1938, but I remember the big excitement when the white bread came out after the war.” – Leopardstown Park Day Centre Member

Left: ‘Beehive bomb shelter in the grounds of Cabinteely House. One of a few constructed there. Associated with Irish Defence Forces planning around the period 1939-1945. The classical version was an air-raid shelter designed to protect up to 6 people from the blast of a 500 pound bomb.’ Photo courtesy of South Dublin County Libraries: Joe Walsh Collection 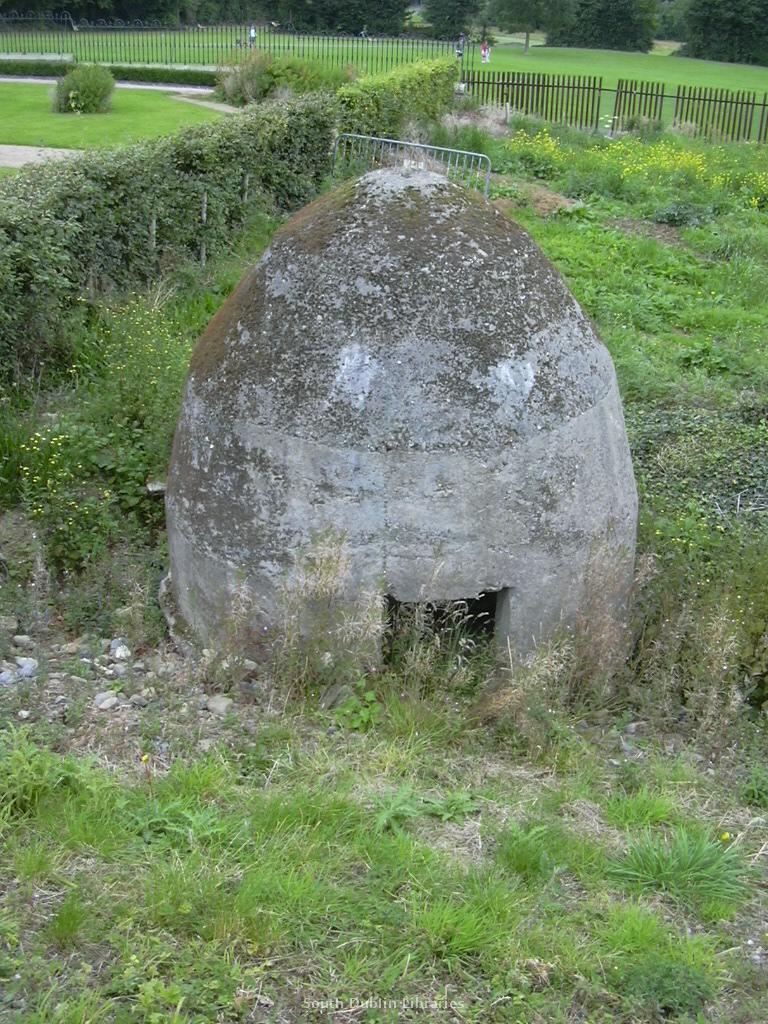 ‘A ration card for a Mrs. Moylan from Boland’s Bakery.’ Source Anonymous

“We often had to walk home to Kill Avenue (from Dún Laoghaire Pier) as there were no cars or buses. The shortage of petrol during the war. I remember my sister brought a little puppy she found out to my mother in Drumcondra, and Mam said, “What will we call it”?… And she said, “Well, I think it was on the news tonight that the Germans had bombed the Kish, so we called him Gerry. He lasted much longer than Hitler did.” – Eva Sutton, The Clevis Unit Member

“In 1945, as a family we were walking along Killiney beach towards the end of the war when we came across a number of bags. These had been washed ashore from some vessel under what circumstances we can only imagine. My father, an AR (Air Raid Precautions) Warden, told my sister and I to stand away until he checked them out. Having satisfied himself as to their contents, he dispatched my sister and myself on our bicycles to fetch the local Rector who had a car. Having loaded the car with some of the bags he then reported the find to the proper authorities. I do not know what happened after that with the find, but what I do know is that a great amount of fresh ham was eaten in the parish in many houses the following week.” – Joan Richard Needham

“My mother and father emigrated to England to find work when there was no work over here. But unfortunately, my father died over there. He was only in his fifties. My mother was expecting her third child. And I think I was five at the time. So, she had five, four and a new baby on the way. That was in 1940. The war had just started in England and she was on her own there. We were down in the shelters from the bombs. That wasn’t the life that she wanted, so she decided to come home.” – Kathleen Clarke, Shankill Day Care Centre Member

I was down the country when they had those bombs. And we had tea and sugar and everything down the country, and up in Dublin they were all on rations.” – Leopardstown Park Day Centre Member

“We weren’t hungry, but things were rationed. You couldn’t get a banana or an orange. We had ‘black bread’. My father was once given a loaf of white bread from a baker, and we all fell on it! We thought it was wonderful.” – The Clevis Unit Member