HelenaByrne · Episode 4 – “I Loved The Dance Halls… I Used To Say, Oh I Wish It Was Saturday Night.”

It’s Saturday night. You get dolled up in your favourite dress, jump onto the bus in Dún Laoghaire and make your way to the Arcadia dance hall in Bray. Perhaps you’ll meet a few nice dance partners. Perhaps you’ll meet your future husband! Either way, a great night of music and fun lies ahead.

Nowadays, you’re likely to meet a romantic love interest online, but for young singletons in 50s & 60s Dún Laoghaire, the dance halls were the place to be. The likes of the Top Hat, the Ierne and the Arcadia were exciting scenes with music from the infamous showbands of the era, an escape from the mundanity of worklife and offered the thrilling possibility that you may meet the love of your life on the dance floor.

“We went from one to the other really. The Top Hat if you wanted to be posh (laughter). The Workman’s Club, the Arcadia in Bray. The Irish Club and the Ierne. They were all in Parnell Square. If you had a drink on you, you wouldn’t be let in the door. Some of them would have a break with tea and coffee. And men stood at one side and the women stood on the other side. And if you didn’t get asked to dance, you’d be a wallflower. So you did make the effort (to dress up) before you’d go (laughter). The men asked the women to dance, unless there was a lady’s choice during the night.” – Leopardstown Park Day Centre Member 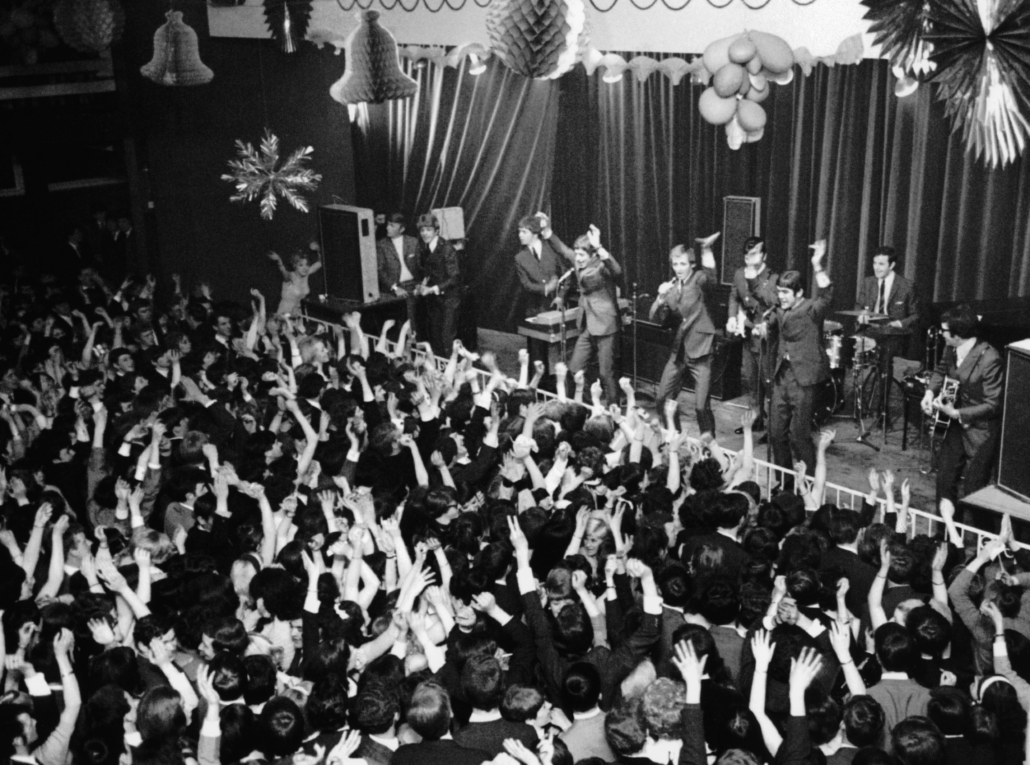 Above: ‘Dickie Rock and The Miami Showband perform Simple Simon Says at the Arcadia Ballroom, Bray 1968.’ Photo courtesy of the Bray People Newspaper

“The Dress Dances at the Gresham. They were very good, but they gave you a supper which was so horrible. It was cooked ham which they had got cold and reheated. And mashed potatoes with lumps. Lumps you know! I went to one in Clery’s and the food was great.” – Mount Merrion Friendship Club Member 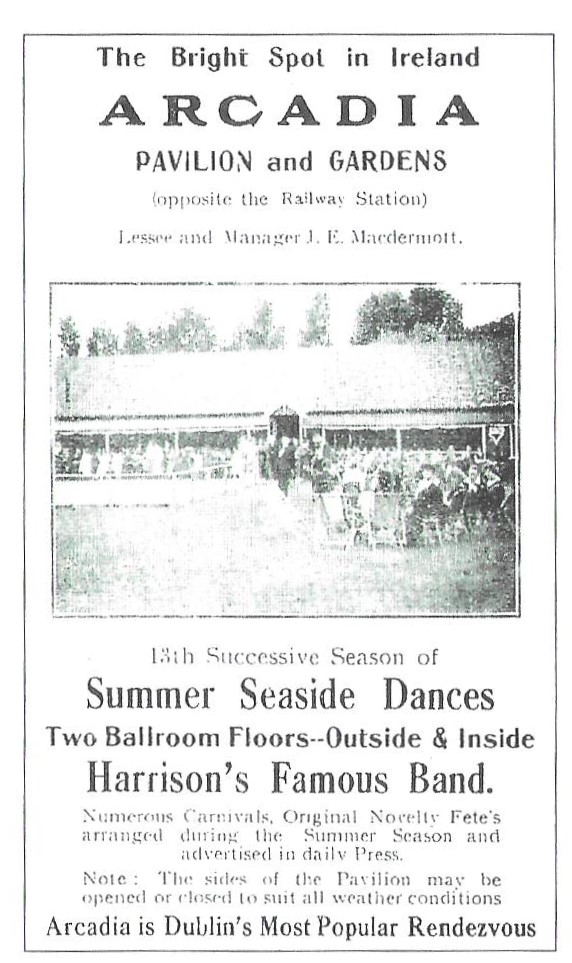 Left: ‘Arcadia Ballroom Poster. Dancing was outside or inside depending on weather.’ Photo courtesy of Wicklow Libraries

“I met my husband at the Arcadia. Many romances came out of the Arcadia… Our first date was after Christmas, in Dún Laoghaire… And at that time everybody was emigrating. They were going back to Dún Laoghaire to get the boat to England. So, all the buses were passing by, they were all full. So I couldn’t get a bus, and my date was half seven. So, there was a couple standing at the bus stop, and they were going down to Dún Laoghaire to the Pictures. I says to them, “I have a date tonight with a fella, but I’m sure he won’t be there. I think I’ll go home”. “No, don’t go home,” they said. “Come down to Dún Laoghaire with us, and if he’s not there, you can come to the pictures with us… Anyway, we went down to Dún Laoghaire and I was an hour late. And he was still standing there waiting on me… We went down to the Roma Café, and it wasn’t coffee in those days. We had a cup of tea and a chat, and we went for a walk. We were sixty years married… That was my true love” – Kathleen Clarke, Shankill Day Care Centre Member

“The sixties and seventies was when all the showbands came along. The Royal Showband and Dickie Rock. I think we all saw Joe Dolan at one point or another.” – Leopardstown Park Day Centre Member

“I played golf with Joe Dolan. I was part of a local golf society. And very often he would play golf and immediately he’d be off to Germany or somewhere where he’d be off to sing. He wouldn’t have time to come back to the restaurant to have a meal or anything. He wasn’t bad (at golf). Better than I was.” – Leopardstown Park Day Centre Member

“When you got married, you had to give up your job.” – Kathleen Clarke, Shankill Day Care Centre Member